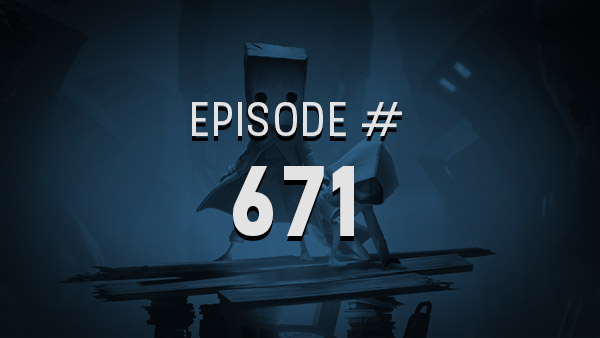 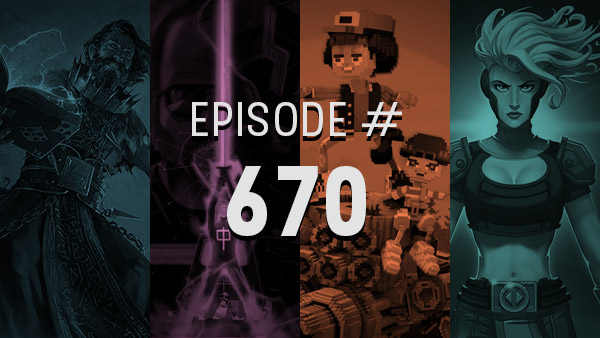 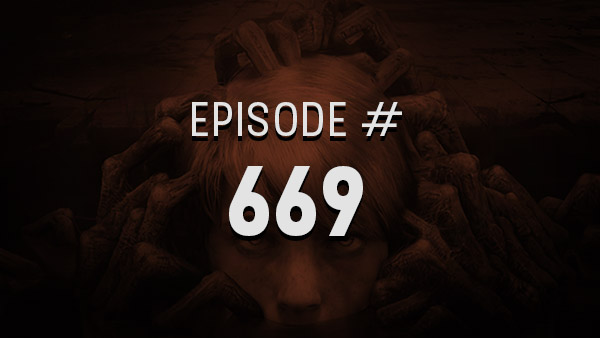 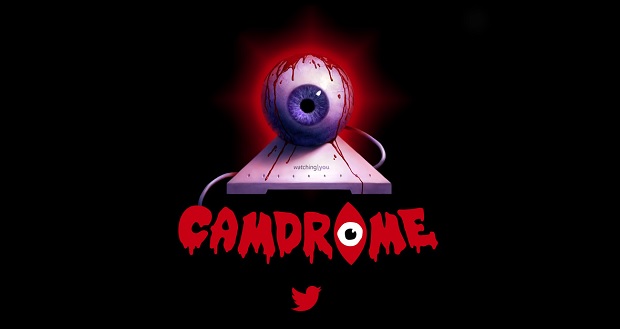 PAX Prime 2013 was a flurry of sights, sounds, and activity. Multi-million dollar titles with sprawling booths mingled with smaller indie titles in their modest yet spirited spaces. There was so much to see.
So much, that you very easily may have walked right by one of the most interesting things at the whole show and missed it.

In the back of the Main Hall sat the iconic Indie Megabooth, a large collaborative space for smaller independently developed games that may not have otherwise had a chance to show at PAX. But tucked away behind the Megabooth was a small alcove wherein a dated PC tower sat with an equally dated CRT monitor and web cam. The whole set up was drenched in blood, and a chair sat invitingly before the monitor.

Had you happened to notice this small space, and had you happened to be curious (or brave) enough to sit at the bloody computer, you would then seen a series of odd, macabre, sometimes downright horrifying videos. Between each video, a logo featuring a webcam stylized as a bloody human eye faded into view. 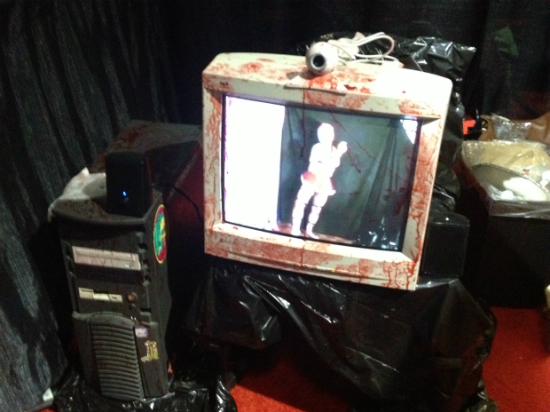 We first heard of CamDrome when our own Nick Henderson tweeted out a picture of himself wearing a wig. A Twitter account named @CamDrome responded to Nick with a picture of a girl getting her throat slashed. Needless to say, our interest was piqued. So the next day, we set out to track down the mirthful messenger. We approached the small “booth” (I use quotes because it really was hardly a booth at all) and found a couple of con-goers standing around watching CamDrome’s monitor. They viewed one or two videos before shrugging to one another and continuing on down the aisle. A man wearing a PAX Exhibitor badge stood next to the mysterious machine, looking quite casual. Surely, this man must know something about what was going on, we thought, so we approached him.

“No, I actually work at the booth next door,” he explained. “I haven’t seen a single person working this booth.”
He went on to explain that not only did he not know anything about who was behind the odd display; it had already been set up when he and his team first arrived on Friday morning. Even more chilling, he admitted, was that CamDrome seemed to be adding new videos to its loop every day.

And then there was that webcam. Who was on the other side of it? Were they watching passersby who stopped to view its strange clips? And why was it at PAX to begin with? Floor space at PAX Prime is extremely expensive. We have no way of knowing exactly how much this small space actually cost, but conventional wisdom dictates that it must have cost quite a lot of money. 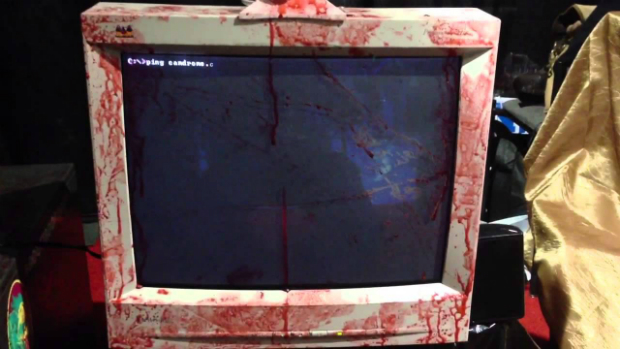 Realistically, the CamDrome booth must have been a clever guerilla marketing strategy for some as of yet unannounced independent game project. But it’s tough to tell from looking at all the available information. So far as we know, CamDrome consists of the PAX booth, a twitter account, @CamDrome, and a website, Camdrome.com.

The Twitter account, it seems, first became active on July 18, 2013, having simply tweeted the words “watching you”. From there @CamDrome went dark for over a month, resurfacing on August 31, the first day of PAX Prime 2013. Its return was marked with several distorted pictures of the computer itself, and a link to an article about a man in Japan who committed suicide live on the internet, while being egged on by live viewers. Over the next few days, it tweeted out other news pieces related to suicide and cyber bullying, along with more disturbing and distorted images, including the one sent to Nick. The news pieces all appear to be genuine and in no way are directly connected to each other or any sort of game or project in development. And things got consistently weirder from there.

When we looked up CamDrome’s website, we were greeted by the now familiar webcam eye logo and a link back to it’s Twitter account. Obviously we weren’t satisfied with this, so we dug deeper. When we viewed the website’s source code, we were met with an ASCII art image of an exceedingly creepy face grinning beneath a hood. Below that was the phrase “meat is meat” repeated over and over. Other odd bits of info were also interspersed within the code, such as the phrase “feel the knife pull the wire around your neck now I’m watching you”.

From there we went looking for information on the sites origin, we didn’t find much. We did find the address of a shopping center in Scottsdale, Arizona, for some reason. With the address, we also found a phone number. At three o’ clock in the morning, after much debate on the whole CamDrome issue, we decided that we had to know what was going on. We had to talk to someone. The phone number connected us to a customer support line for some company we didn’t know, and we found ourselves talking to a support representative who knew nothing about an entity called CamDrome, and was obviously a bit perturbed by the perceived prank that he had just been made the victim of.

We had been met with dead ends at every turn. Worse still, @CamDrome continued to tweet out information that left us with more questions than answers. We had all but given up hope. But as we stepped back to look at the whole image, things began to make more sense. 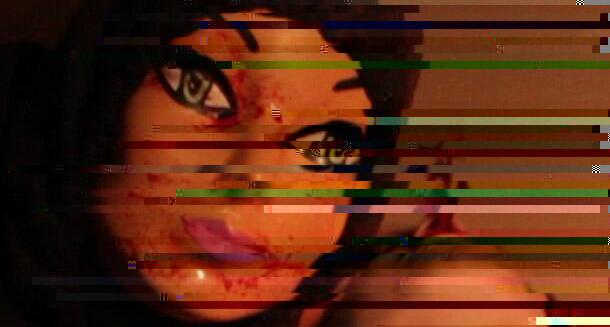 All along, we couldn’t help but notice the glaring similarities and references to David Cronenberg’s cult-classic film Videodrome. In the movie, James Woods plays the head of a hyper-sensationalist UHF station. Without giving too much away, he discovers a clandestine signal hidden in television broadcast that uses violence, sex, and super-science to brainwash people, with very ugly results. CamDrome’s videos for the most part depict supposed Internet personalities engaging in one subject or another before being brutally murdered, usually by a masked killer, or committing suicide. It would seem that something about the CamDrome entity has some kind of power or influence to ensure these people meet with violent ends. The exact nature of the power is still a mystery. Also there’s the way CamDrome speaks (types), giving his words a near-spiritual air to its message. This bears an eerie resemblance to a character in Videodrome named Brian O’Blivion. Mr. O’Blivion is the leader of a new-age spiritual movement that believe television will one day replace normal human consciousness. One of the most famous lines of Videodrome is, “long live the New Flesh”, whereas CamDrome often uses phrases such as “meat is meat”.

WARNING!! In this next section I will discuss the real-world implications and connections that we have been able to formulate. These may be of a slightly SPOILERY nature, if you had any interest in keeping the fun of the mystery alive.

After a return to our search for information on the site’s domain registration, our Review Editor, Joseph Christ, did stumble across something very telling. He found the name of the person who registered the site through a Whois site: Edmund McMillen. It is possible it could be some other “Edmund McMillen”, but that would have to be an extraordinary coincidence. No, it seems to us that this is the work of Team Meat, the folks behind Super Meat Boy and The Binding of Isaac. Unfortunately the information seems to have been scrubbed since our initial finding on Saturday night of PAX. 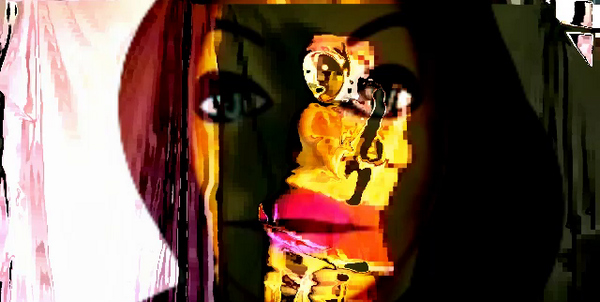 When we Googled the phrase “CamDrome Team Meat”, the first result was a PDF on backseatconceptions.com that seems to be a resume for one Doug Sakmann, Director/Producer/SFX Artist at Backseat Conceptions. Beneath the link the sample Google provided read as follows; “horror video game to be released this Fall by Team Meat, the creators of Super Meat Boy and The Binding of Issac. However, when we tried to open the link, we found that the page had been pulled, leaving only a redirect back to the main Backseat Conceptions page. There, we learned that this company is a multimedia production service, specializing in things like music videos and commercials. It’s our theory that they helped Team Meat produce the CamDrome videos.

We still don’t officially know the truth behind this odd little machine we saw on the PAX show floor, but we are becoming very excited by the possibilities. Since I’ve begun writing this article, we have received several strange emails from CamDrome. The most recent one contained a .GIF the seemed to be an incomplete image as well as a message: “- you are 9 of 11 | absolve yourself of guilt | breathe life into me –“

It seems we have been chosen to help reveal CamDrome’s secrets. Stay tuned for more updates soon. Whatever happens next, it promises to be exciting.