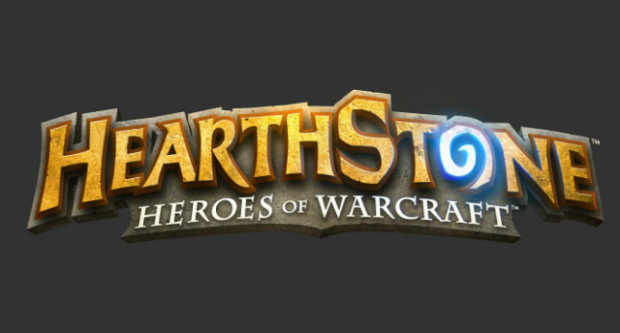 Earlier today Blizzard announced a new free to play digital card game very much in the vein of Magic The Gathering for Windows, Mac and iPad. Being a long time fan of Blizzard I was excited to see the "something different" they had promised to announce, but not being the biggest fan of TCGs I admit I was a bit apprehensive. My times with Magic the Gathering was infrequent at best; an experiment in my youth in High School. What Blizzard delivered seemed to have that promise of polish, balance and a streamlined experience that will suck in even the most inexperienced gamers in the genre of TCGs.

It features gameplay as one of the primary heroes in the World of Warcraft. When you start the game, you choose a class which is associated with a character from the lore. For example, I chose the shaman class which of course was Thrall. Warrior was Garrosh Hellscream, Wizard was Jiana Proudmoore, Paladin was Uthur Lightbringer, etc. Each of these warriors confers you a special ability you may use during you turn at the cost of mana.

When the match begins, the players start wth 4 cards and the option to discard any or no cards in exchange for new ones. At the beginning of each round, a new card is draw adding to your hand. In addition you gain one more mana crystal, which you use for summoning and activating you cards. You may also spend one mana activating your hero's special ability. For the shaman, this ability was to summon a random totem minion to aid you in battle (healing stream, searing totem, etc). At the beginning of the round you regain all of your mana and increase the mana pool size, which causes gameplay to increase in brutality and speed as the game progresses. 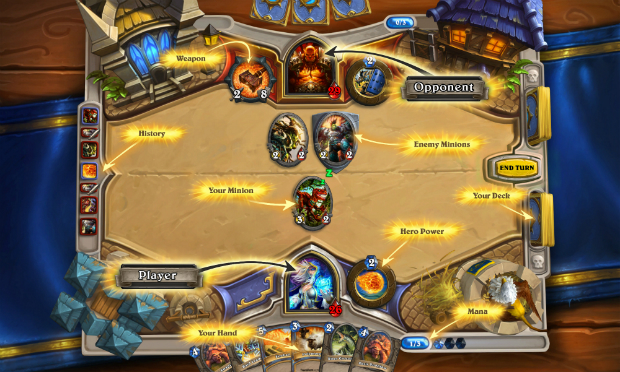 The cards consist of the typical minion and spell variety, but as for how they are played is a bit unique. In Magic, when you attack, you choose which cards are attacking and the opponent chooses what defends. In Hearthstone, you choose the target you wish to attack, including the player. Of course, when the player reaches 0 hit points, they lose the match. The catch is, that there are cards with the "Taunt" ability which will block attacks and force players to attack them instead of other targets. Since each card has its own damage and health, when they take enough damage, they too will perish to the discard pile. The game itself seems to encourage quick matches as the increasing mana pools and small deck sizes restrict how long you can play.

Throughout the entire match you can see your opponent hesitating with cards as he or she holds a card out (face down) hovering above the playing field. Along with lots of flare and flourishing colors, the gameplay is very vibrant and lives up to the colorful style that Blizzard puts forward. While the game may be a deviation from the norm for Blizzard, it certainly looks like a Blizzard game. 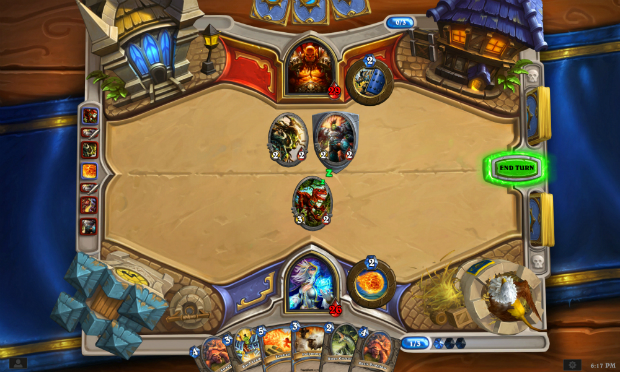 Blizzard also announced that players will be able to customize their decks with "booster" packs they can purchase for "around a dollar." Apparently there are other methods to obtaining new cards without spending money, but they didn't specify how. You can also "disenchant" unwanted cards into materials you can use to craft new (possibly random?) cards. With hero casses, rare cards, crafting and deck building, it seems like Hearthstone is going to have a bit of variety.

Like with many of the other recent titles Blizzard has developed recently, Hearthstone definitely feels like a complex idea that was simplified allowing anyone to grasp it. In my first match I was able to understand almost all of the rules about halfway through allowing me to dispatch my opponent. With the time I spent on it, I definitely enjoyed it and can't wait to see more of what they will offer. As for the revenue model, it seems like we'll have to wait and see to understand how it will impact the competative aspect of the game in addition to how it hampers player progression. For an experiment, this is definitely worth keeping your eye on.