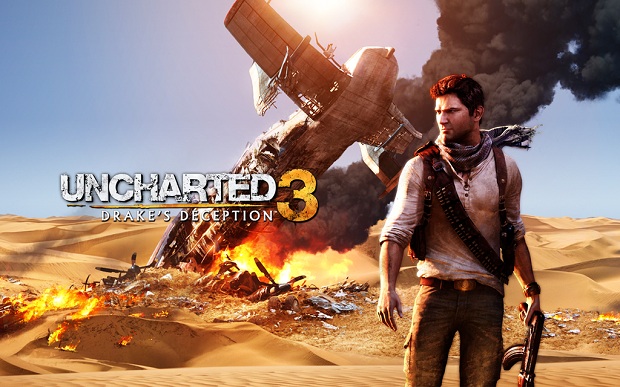 Uncharted 3 details the adventures of Nathan Drake as he teams up with a few old faces, and a few new, to track down the third and possibly greatest treasure that Sir Francis Drake had discovered. Through a superbly constructed narrative an incredible cinematic experience unfolds: one to rival the peak of the series, Uncharted 2. Naughty Dog has certainly outdone themselves in this sequel in almost every aspect; the artistic direction, environmental design, voice acting and character interaction glued me to the edge of my seat throughout the entire experience. While the environments were stunning and the storytelling gripping, what really struck me in Uncharted 3 was the exploration of the relationship between Nathan and Sully. Naughty Dog dedicated quite some time elaborating on the history between the two characters, where as in the previous two games it was entirely auxiliary. You could say that Elena was the focus of the first Uncharted, Chloe and Flynn were the focus of Uncharted 2 and in Uncharted 3, Sully really takes the main stage.

I am continually impressed that Naughty Dog was able to grow the series and progress each of the character's narratives by giving credence to the fact that everyone is actually aging. Naughty Dog has done a superb job in giving depth to their characters and has continued to do so in Uncharted 3. One must not suspend belief to recognize the mortality of the cast and in particular with Sully. While I felt a kinship with him in the first two games, this sequel really solidified that emotion. Kudos for Naughty Dog for doing what very few developers have done before; they made me actually care for the characters in the game. While Uncharted 3 is not the perfect game, there are no faults I can find that are not common between all of the other iterations in the franchise. One of the biggest problems that comes with the series is the incredibly linear story. This is entirely understandable due to the cinematic nature of the games, but it becomes incredibly punishing if you do not recognize where it is guiding you or you attempt to deviate from a given path. Some exploration is rewarded with hidden treasure, though almost always there is only one correct path and one correct solution to a problem. More than once did I find myself doing the right thing, but not doing it in the correct way; this made me second guess myself and suffer a succession of failures to only try again what I was originally attempting and succeed.

Linearity aside, I have never found the gun-play or cover system agreeable in any of the Uncharted games. There were many times where I screamed out in frustration as I unloaded what I had thought was an entire clip into an enemy's face to only realize I was off by a fraction of a centimeter. I also do not share Drake's affinity for chest high walls and can only get angry at him when he inadvertently glues himself to the wrong side of one. He also tends to suffer postpartum distress with said cover and will refuse to remove himself from walls. This can become increasingly aggravating when the situation calls for some quick action. If you can adjust to the combat, which I had gradually grown accustom to, you can try your hand at Uncharted 3's multiplayer. Naughty Dog really improved on the online multiplayer from the previous iteration in Uncharted 2. While you can still find the co-op and versus modes, there is an increased depth to each. Naughty Dog has added a rank system to their online component (who hasn't these days?) in which players can rank up their characters in order to unlock and purchase new weapons, modifications and customizations that may be applied to their avatars. The amount of customization that can be made to your load outs, individual weapons as well as your player character is rather impressive.

While I was originally afraid that the inclusion of such a deep multiplayer would serve only to drive resources away from the single player experience, Naughty Dog has certainly not done so. The same care that can be found in the single player can be seen in the multiplayer. The levels are well designed and incredibly fun while including some specialized events unique to each map. At first, I had found myself apprehensive with the online multiplayer but by the end of my session I was laughing like a madman and craving more. The only downside of this component is that Uncharted 3 requires an online pass, so if you were hoping to get the most out of your purchase, be prepared to spend some extra cash if you are buying it used.

Naughty Dog has certainly created a very well rounded experience both online and offline in Uncharted 3. While the main draw of the Uncharted franchise is the unparalleled cinematic experience of the main narrative, the online multiplayer still stands as a relatively enjoyable piece of entertainment. It is definitely not a perfect game, but Uncharted 3 is absolutely worth the purchase.

Score: 90%
(90-99%: A fantastic experience that surpasses almost all expectations.)