Review: Ratchet & Clank: All 4 One 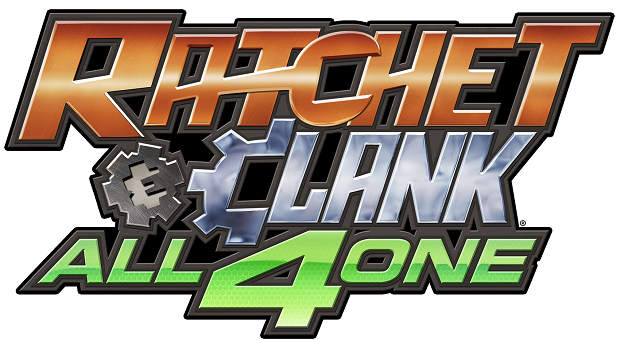 Ratchet & Clank: All 4 One is Insomniac’s second multi-player focused game in the series. Back in 2005 they had released Ratchet: Deadlocked, which was a cooperative arena focused game where Ratchet and Clank fought for their survival in an intergalactic tournament. All 4 One, however, takes the more traditional single player story driven route of the previous games; the four most prominent characters in the series, Ratchet, Clank, Dr. Nefarious and Qwark are set against an unknown foe that is threatening the universe. Sound familiar? It should; that is the basic plot for every single previous Ratchet & Clank game. The story is standard fare for a Ratchet & Clank game and the comedy is on par with the other titles in the franchise. There certainly were a couple laugh out loud moments in the cut scenes that reminded me of the humor you can find throughout the series. Unfortunately, All 4 One does play a little heavily on inside jokes from the previous games, so if you’re unfamiliar with the characters and their quirks, you may find yourself befuddled by some of the jokes. Story, however, isn’t really the focus of this game; it is the four player co-op that distinguishes All 4 One from the previous iterations.

All 4 One is, at its core, a cooperative game, even down to the menu design. At the title screen you are immediately confronted with the choice of playing online (which requires an online pass) and offline (same screen co-op). Once you select one of these, you get to choose which level and check-point you want to start at. This can be a bit overwhelming at first since there appears to be a plethora of options on each of these screens. When you are playing the game for the first time, however, almost all of these options only have one choice, making it needlessly complicated. Once you manage to get through the menu system and choose a starting point, you can select your character. When the game begins, everyone is sharing the same screen with a fixed camera. With up to 4 player co-op, this was the obvious choice; while split-screen worked great in Deadlocked, it would have been impractical to split it 4 ways. One of the biggest problems I had with the game was mostly due to the locked camera. While I understand the necessity, it made the controls very difficult to adapt to. Normally the right analog stick would control the camera, however, since that was not an option, it instead controlled a radial menu for choosing your weapons and gadgets. Numerous times, in the heat of battle, I would accidentally try to adjust the camera and instead switch to Mr. Zurkon and waste one of my scarcest ammunition. My other problem with the controls was that they were not explained very well. I had to look up online to discover that the D-Pad is actually a quick slot menu allowing you to slot three different weapons with the down button swapping between your current weapon and gadget. The gadget quick swap is a savior as having to switch to a gadget using the radial menu was a nightmare, especially when you have multiple “pages” to switch through.

While I was able to adjust to most aspects of the controls, there was one element that I could not master and still have absolutely no idea how it is supposed to work: the target lock on feature. I believe, in order to lock onto a target you are to supposed to press L1 and hold it. The problem was that I could not find a way to switch targets, and which target it chose to lock onto seemed to be completely arbitrary. This becomes a huge problem in the co-operative component of the game; most of the weapons you have access to become more powerful dependent upon everyone using the same weapon on the same target. If you can’t even shoot at the same target, it quickly becomes impossible to take advantage of this feature.

If you are not fortunate to have anyone to play All 4 One with, you will then be partnered with Clank who is driven by a very simple AI. While the AI partner can perform all of the required cooperative actions, I often found it floundering at the most simplest of tasks. More than once Clank flung himself off into the abyss during the platforming sequences, and there is a lot of platforming in Ratchet & Clank games. While you are perfectly capable of playing the game through solo, I could not recommend it. I had only played through several checkpoints with the AI partner and even after that short amount of time it was beginning to wear on my patience. As with the other titles in the series, the main currency in All 4 One is bolts. Players must kill enemies and smash crates to earn enough bolts to purchase and upgrade their weapons. The only problem with the way they implemented this is that the bolts are not shared between players. Insomniac created a competition between the players, rewarding the player who earns the most bolts, kills the most enemies, etc. While this may seem like a good idea, at one point in the game, I had to slow down on how many bolts I was collecting so my co-op partner could get enough to upgrade her weapon. With one person hogging the only resource in the game, you quickly create a discrepancy between the other players. If they can’t buy or upgrade the same weapons as everyone else, then the team as a whole suffers.

Another problem I encountered was with the weapon upgrading system. In previous Ratchet & Clank games, weapons upgraded with use.  In All 4 One, the only way to improve a weapon is to purchase three different upgrades at a weapon kiosk: ammo, damage and elite. The elite upgrade is only available after you have bought the other two; it basically gave you a “leveled up” version of the weapon. This was a bit disappointing considering that the weapon upgrade and modification system in Deadlock was so very deep; you could attach an electricity mod to a shotgun so it shot a cloud of electrified pellets. Now when would you not want a fucking lightning shotgun? As I had mentioned previously, in order to get the most damage done to enemies, players were encouraged to use the same weapon on the same target. This feature almost became essential later on when ammunition was scarce and endless waves of enemies were falling upon you. If you wanted to use a different weapon than your co-op partners, you were out of luck. Most of the time, however, I usually chose the same weapon as my partner due to the situational aspects of each gun. Despite these minor complaints, the weapons were inventive and the combat felt really solid; the carnage that they can cause when using the same weapon on the same target was extremely satisfying.

The co-op in All 4 One stood up extremely well during the puzzle sequences. It almost felt like I was playing Portal 2 (which was even referenced to several times in the game) with players each contributing to the solution of a larger puzzle. A lot of the mechanics and gadgets worked extremely well together, however, I cannot say how well it would have stood up with more than two players. My only complaint is that they didn’t have enough of these sequences. While I would have loved to have some boss fight with a puzzle component thrown in, they never really strongly executed on it. I think this is mostly due to the fact that they still wanted the game to be playable single player.

While I cannot attest to how All 4 One’s online mode works (I rented the game and did not want to purchase an online pass) the offline mode works great for couch parties. Each of the four character’s progress is tied to your PSN profile, so if you only play two of the four characters, the neglected ones do not level. This would be detrimental if someone wanted to pick up a character you haven’t played before, but catching up is rather easy. When my co-op partner could no longer stand Qwark’s one liners, she chose Dr. Nefarious and began to level him up. Despite starting Nefarious at level 1 about 30% through the game, she quickly caught up in bolts and progress.

When it comes down to it, Ratchet & Clank: All 4 One is a pretty good cooperative game. If you were to compare it to the single player experience of the previous titles, it does not stand up very well, but that is to be understood when you take it in the context of a multi-player focused game. If you are a diehard fan of the series, you should be able to get something out of the game, regardless if you play it with someone else or not. For the rest of us, All 4 One is absolutely best consumed in a cooperative context.