Truth be told, I don’t know much about Steve Jackson’s work outside of the fact that he wrote a series of adventure game books back in the early 80’s. While I haven’t read them, I’m inclined to believe they must have been ‘special’ or Inkle Studio’s wouldn’t be reincarnating Mr. Jackson’s stories in digital form. Right?

Turns out, it was something special.

‘Sorcery!’ is not simply a digital copy of a game book. Sure, you’ll be reading – it is still very much a book – but enough has been done to spice up the experience of reading an adventure game book of yore. From ambient audio and a surprisingly strategic combat-system, to an interactive-map and interesting spell-casting mechanic, Inkle Studios’ take on Steve Jackson’s works glued me to my iPad for hours on end.

I wasn’t simply reading and choosing branching story-paths, I was still very much playing a video game...which turned out to be my biggest concern prior to actually playing Sorcery!

Those concerns are long gone. 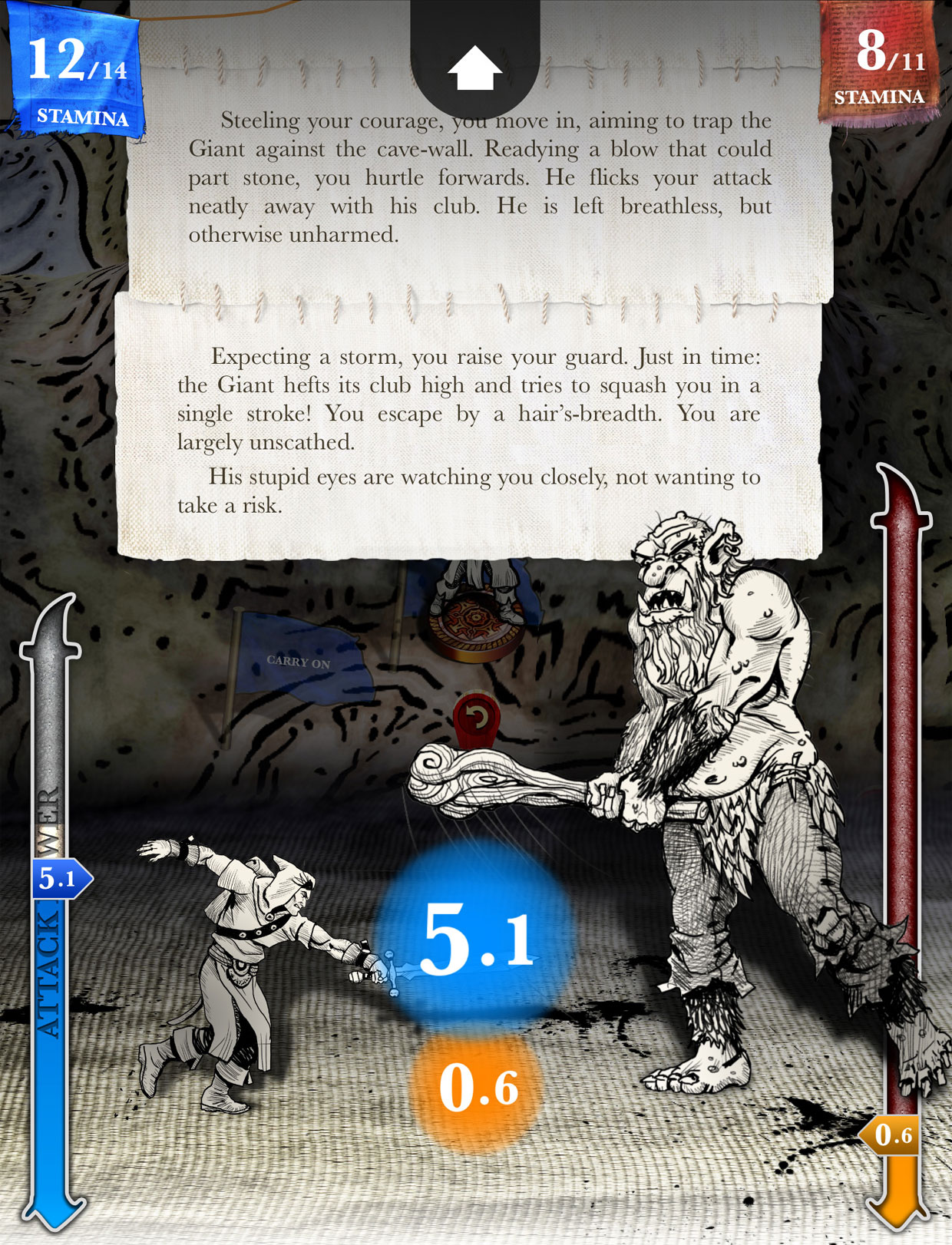 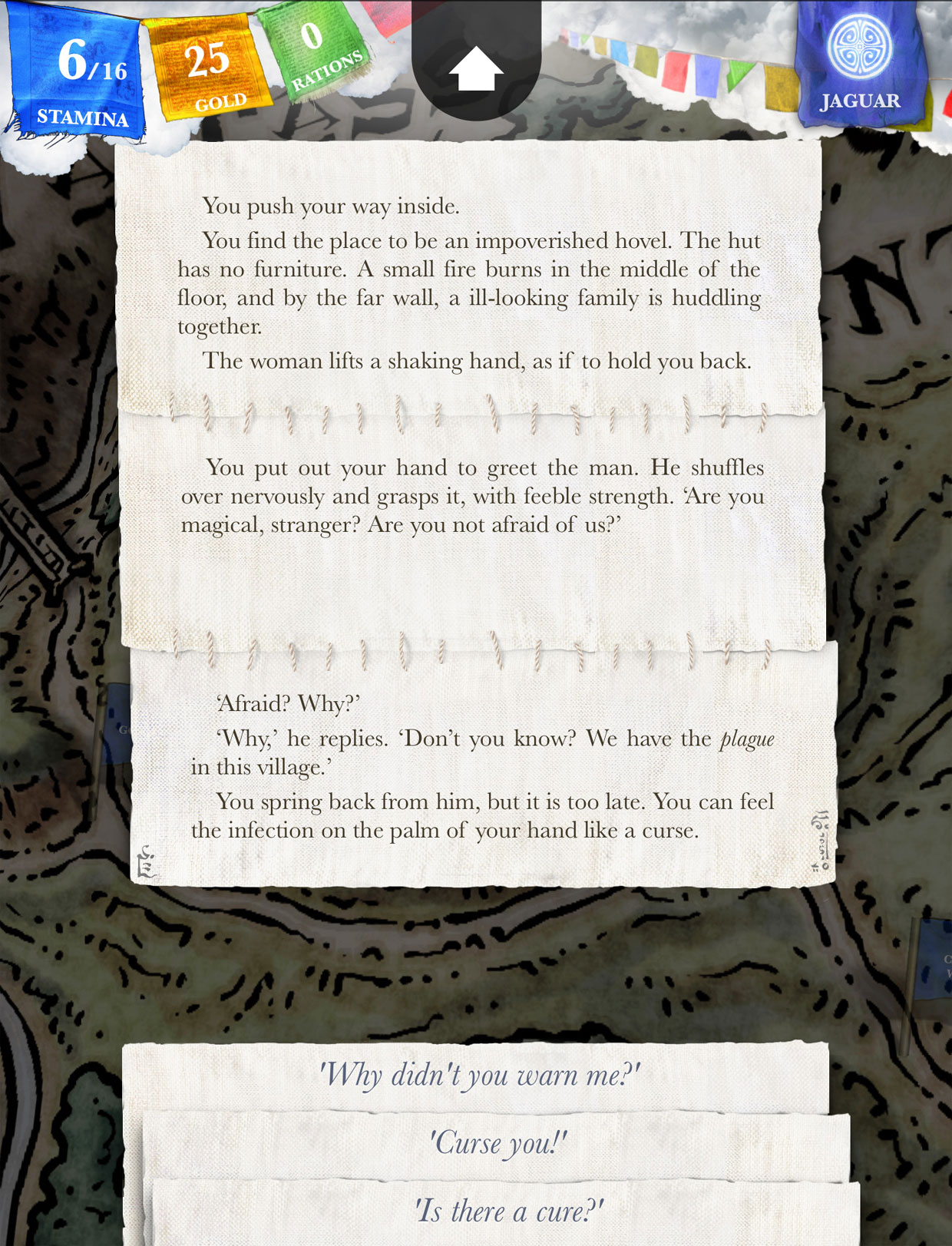 I didn’t want to simply be reading a game book and am excited to see Inkle knew I wouldn’t be the only one. The “game-ification” of Sorcery! is smart, much more interesting, fun, and appeals to an audience who wants a little something more out of their digital create-your-own-adventure games. It isn’t without its problems though, as the later half of Sorcery! becomes a bit frustrating because of this game-ification – when at the point of no return in the plot.

Sorcery! comes in parts, the 1st being ‘The Shamutanti Hills’, and begins its journey with a hero in search for the legendary Crown of Kings. The story is yours entirely to shape and branch however it may. My adventure, in particular, took me to strange villages, magical-bridges protected by trolls, and beautiful yet deadly flowerbeds. Every decision made would help me stay alive, find a bed to rest in or warm plate of food to scoff down.

The essentials to survival are not easy to come by, often forcing your hand to sacrifice one for another in moments of stress. Stamina increases with every meal, and replenishes slightly with nights of rest. Gold will buy you the opportunity to stay at an inn and eat a meal worth bragging about, or stash away rations in your backpack. When luck has run out and all opportunities to regain stamina have but disappeared, your journey ends with a tombstone.

At any moment, during your travels across the Khakabad Wilds, you may rewind back to a previous sequence/event; saving you the frustration of starting the entire adventure over due to poor decision making. Or, if you’re the kind of player who enjoys unraveling a story and all of its branches, you can do that too. 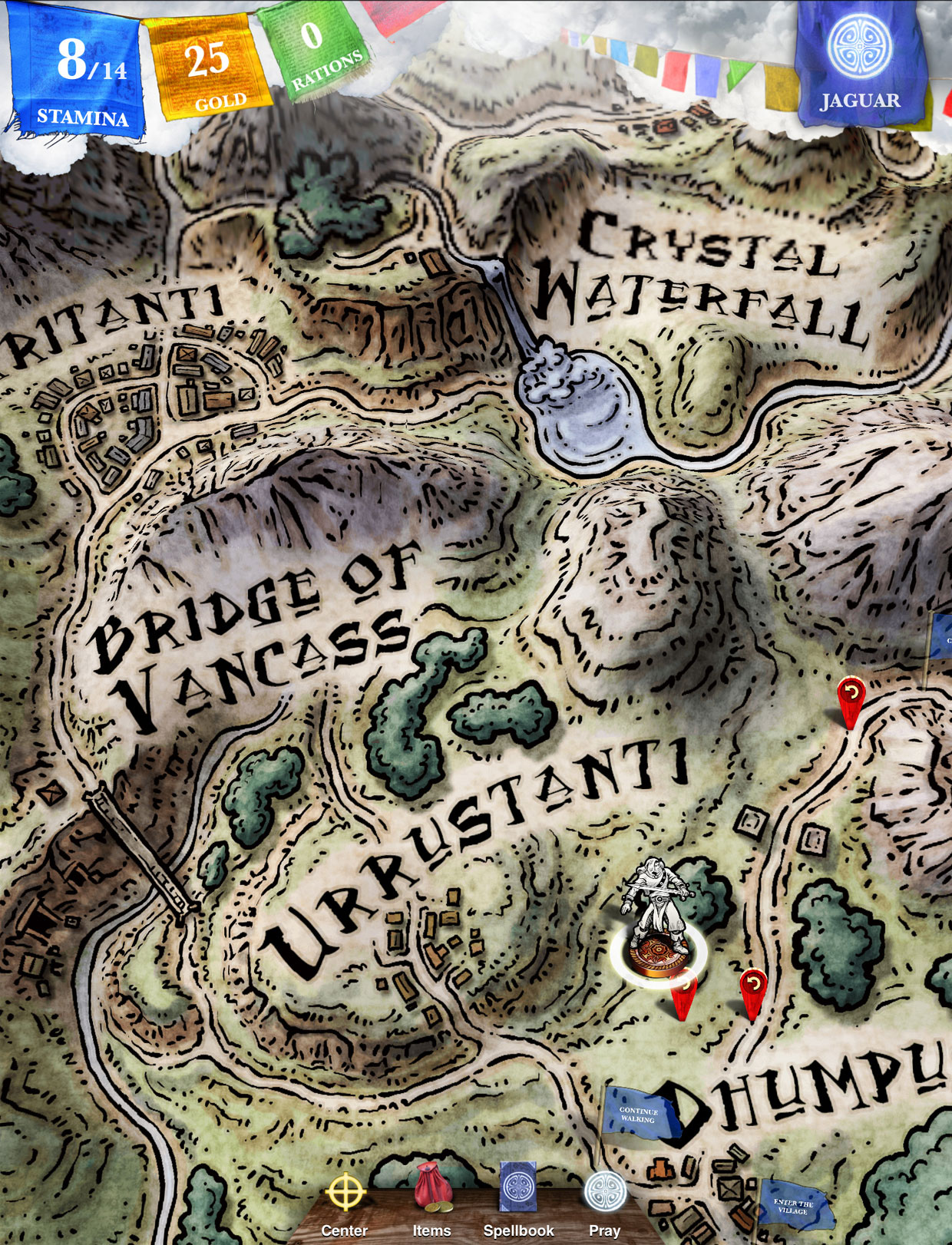 Moving from point to point is as simple as a touch-and-drag gesture over a large and beautiful map. Controls remained accurate, even in cluttered areas, and never suffered in responsiveness during combat, inventory, or otherwise.

Combat relies heavily on luck with a dash of strategy, and was surprisingly much more engaging than I first expected it to be. By wagering how much endurance you want to thrust into an attack, you must out-weight your actions with your opponents, less you take damage. And defending grants endurance at the cost of a stamina point. Simple.

Reading the attack-description during combat helps swing predictions on whether you should be thrusting full-force or resting back. The guessing-game that ensues really helped refresh the experience of reading on. These combat events are spaced out enough, lending a pleasant pace to the overall gameplay experience.

To be quite honest, I’m not sure how endless the possibilities of ‘The Shamutanti Hills’ actually is. As my adventure closed to credits, I remembered the troll teeth and a large net I collected but never used. Where could I have used those? And then there are those Spirit signs, which can be preyed to; what about them? Also, that spell-book and the 40+ spells I never bothered to cast, would those have changed how things played out?

I’m guessing it would. And if I was the type of go-back gamer I would have hit rewind 100 times to find out, playing for another dozen or so hours.

My only major issue with Sorcery! came when unfortunate events forced me to struggle through my last enemy encounter – which had 18 stamina points - with only 6 stamina points. It was either this, or rewind back farther and farther until things worked out my way. Never having been one to retread on steps I’ve taken, I decided to test my luck and struggle through the battle.

It eventually ended gloriously, but it took nearly an hour’s time. While this isn’t necessarily a design problem, it is a problem found in many create-your-own-adventure games. Too often, things just get worse. And when you’re already 12 feet into the rabbit’s hole, turning back feels less of an option. Without any foreseeable options to heal, crossing your finger and sweating it out is often the only *real* choice, in my opinion.

Inkle Studios nailed it on all fronts, for me, with this digital-reimagining of Steve Jackson’s Sorcery, otherwise. It’s reading, but not too much, nor too heavy. Sure, that also means these paragraphs aren’t going to win any Scholastic Awards, but they don’t need to seeing as they are working in conjunction with the enjoyment of a branching narrative, art backdrops, ambient-noises, etc. Its design - in art, interface, and systems - is functional, alluring, approachable, and engaging. And it pumps new-life into a forgotten form of story-telling, while never feeling awkward on the platform.

Like reading? Like video games? Want to experience entertainment like it was before most anyone had a home console, laying on the couch, relaxing as your imagination shapes a world that only you can see?

Great - Only very minor issues get in the way of greatness